Twitter WallHarris Academies
All Academies in our Federation aim to transform the lives of the students they serve by bringing about rapid improvement in examination results, personal development and aspiration.

Recently, a group of ‘Harris Experience Advanced’ Year 12 Scientists, including myself, were lucky enough to be invited to attend some lectures at world-renowned scientific organisation, The Royal Society. These were held at the Royal Society’s glorious and historic premises in central London, and were preceded with a tour of their building; host in years gone by to the likes of Charles Darwin, Isaac Newton, Stephen Hawking, and many other icons of science.

The first event we attended was delivered by Professor Katherine Willis, Director of Science at the Royal Botanic Gardens Kew and introduced by The President of the Royal Society, Sir Venkatraman Ramakrishnan. This lecture was called ‘Genes to Beans- Polyploidy on a Plate’ and held on the 11th February 2016. When we arrived, we were greeted by the kind members of staff from the Royal Society and given an insightful tour of the premises. We were given the opportunity to part-take in a mini Q&A session on the history and cultural aspects of the organisation before entering the lecture room and receiving the talk, followed by another questions session where we were able to experience real sparks of scientific debate.

We have also attended the ‘Royal Society- Café Scientifique: Uncertainty in Science’ on the 22nd February 2016. This event took a different approach in that it was more discussion-led rather than a lecture, but was still equally as fascinating. This visit allowed us to involve ourselves directly, as members of our group were given opportunities to contribute to the discussions on global warming and climate change. The evening was hosted by Cognitive scientist Professor Stephan Lewandowsky, a Royal Society Research Fellow in the Department for Experimental Psychology, University of Bristol.

Most recently, a group of Physicists attended a lecture titled ‘The monster at the heart of our galaxy’, delivered by one of the world’s foremost experts on black holes: Professor Andrea Ghez of University College Los Angeles.

As you can imagine, these events are very popular and we are very fortunate to have received such special treatment. I can safely say on behalf of all of the ‘Harris Experience Advanced’ students that we all thoroughly enjoyed the visits, and would like to take this opportunity to thank the Royal Society for allowing us to attend. We look forward to attending more of these fantastic opportunities in the future. 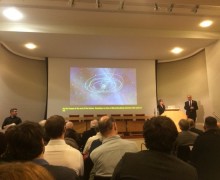 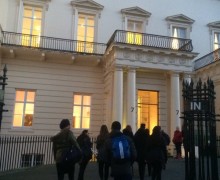